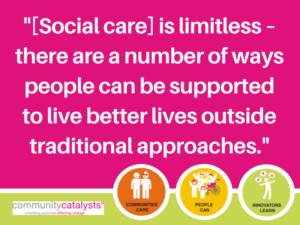 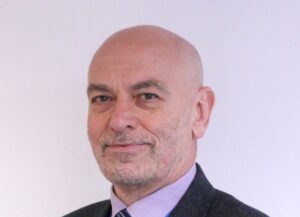 In our latest blog, we catch up with our newest member of the Community Catalysts’ Board, Andy Tilden. We’re really pleased to welcome Andy to the Board, he has had a long and varied career in social care and brings a wealth of knowledge to our organisation…

Andy on his work

I originally trained as a teacher back in the ‘70s and, while on placement, I worked with children whose experiences of education were worse than many of their peers. This really set my future path. After graduating, I worked as a support worker in an observation and assessment centre for children and young people. I spent the following few years in similar residential care work and then in the ‘80s I trained as a social worker, working in child protection and juvenile justice.

Later, I became a lecturer in health and social care and that opened my eyes to the breadth of work in social care…and that it’s not just residential care or home care. It’s limitless – there are a number of ways people can be supported to live better lives outside traditional approaches.

I then moved over to the NHS. At the time, Bristol was closing six long stay hospitals for people with learning disabilities as part of a move towards community care and I ended up training the staff that worked in those institutions who had themselves become institutionalised.

It showed me there was a better way to enable people to have good lives and not be locked up in state institutions…unfortunately the work there isn’t done yet as there are still around 2,000 people in institutions like that.

I later started working at Skills for Care and that’s where I originally met Sian Lockwood and Angela Catley…before they founded Community Catalysts!

When I retired, I was attracted to join Community Catalysts as a Trustee as I liked the way the organisation challenges thinking…in a really dynamic way.

I also wanted to learn and be challenged and to have new ideas and new thinking. Sometimes thinking outside the box can be quite uncomfortable but that’s not always a bad thing if it shifts people’s thinking.

Andy on his recent OBE

Before accepting my OBE, I sought advice from a few people as it seemed a difficult concept for me to grapple with – here I am, put forward for the award on the basis of my paid role. The award is undeserved as, whatever I did through my role, was only because of the great individuals and teams around me…they’re the ones who are worthy of the recognition!

So the obvious question is, why did I accept it?  I wanted to use the opportunity to highlight the breadth of wonderful work that exists under the banner of ‘social care’. There are many fantastic people working tirelessly, showing great skill and innovation and often without true reward and recognition.

It’s about getting those voices out there and heard – like from the many people Community Catalysts support across the country.

RT @DenbighshireCC: @CommCats offers a free mentoring service to help you work for yourself offering help at home to older and disabled peo…

ICYMI here's the blog from @CommCatsIsling: communitycatalysts.co.uk/2022/08/02/exp… - would recommend a listen to Tina's music too… twitter.com/i/web/status/1…