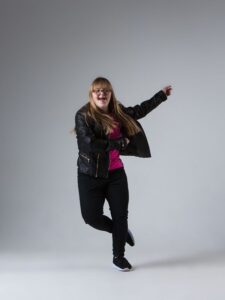 In February and March 2021, two new online workshops were run by Dance Syndrome for the Valuable and Vulnerable project, about becoming a leader.

There was a mixture of dancing and discussion. Sixteen people took part in total, and were asked – who is a leader in your life? What skills make a leader? What skills do you have? The dance leaders showed how dance can express words and feelings, as well as actions. People copied and followed some of the dance leaders’ movements and then created some of their own.

“I spoke about what makes a good leader and the skills and qualities of a leader.  It’s about being professional and well-informed, leading and working as a team. Great leaders let other people have their time to shine, guiding and advising them at the same time.  I led my dance routine to 500 Miles [by The Proclaimers] and everyone loved it and joined in. I would say to anyone, come and join us and be part of something bigger. It doesn’t matter if you haven’t done it before, you can be a leader too. You’ll gain a lot of new skills and build your confidence. Everyone is welcome.”

After the workshops, the mum of one woman who’d taken part got in touch with Community Catalysts to say her daughter was now…

…so excited about expressing her love of dance with others. Lockdown has been a tough time for her as she has felt very isolated. This has helped bring back her sparkle.

This is a starting point. We already train dance leaders, but we would love to do more because we want to support you if you want to be a leader in whatever is your passion. This might be dance – or it might be something else where you work or volunteer, where you would like to lead. So many of us feel vulnerable at times but we can also be strong and valuable. Workshops like this build confidence, finding people who can lead even from unexpected places.

Dance Syndrome was founded in 2009 by Jen Blackwell who has Down’s syndrome. Its dance activity is led and informed by people with learning disabilities. The company has an equal number of learning-disabled and non-disabled members.

During February and March 2021, Community Catalysts’ Chris Clarke ran online workshops about the Valuable and Vulnerable project for forty-six […]

RT @AnnaSeverwright: If you couldn't make the #MoreThanAProvider event today in Manchester there will be one in London in the autumn! I rea…