Stonewater saw this as a chance to introduce to staff to what working with people living across their housing schemes can look like, when the starting point is what people can do.

It gave us the opportunity to get going on our long-term commitment to a strengths-based approach. This is for everyone we work with of all ages, and across housing tenures – shared ownership, owned, and rented. Through the Valuable and Vulnerable workshops, staff could begin to see the role they can play in the things that people want to do to contribute.

Lockdown during Covid-19 has meant that Joanne Morris and her team, working in Retirement Living schemes in Herefordshire, have got to know tenants better because they’ve been telephoning up to three times a week to check how things are. After Joanne attended a Valuable and Vulnerable workshop, she immediately thought of several people with strong interests but who were isolated, some of whom agreed to be put in touch with Community Catalysts. One person handmakes greetings cards and is starting to co-create an advert to put into her scheme’s newsletter, offering to make bespoke cards on request. Another woman, who loves to read, is co-creating a poster asking for anyone who’d like to ‘buddy up’ and form book clubs for two over the telephone to get in touch.

Staff in one scheme wrote about a happy time from their life for their February newsletter, and invited tenants to write and submit their own pieces. Several tenants wrote and had pieces printed in the March newsletter, with more requested for April.

Attending a Valuable and Vulnerable workshop has led Gloucestershire scheme Service Delivery Officer Tami Taylor to think differently about ways of supporting individuals to become connected. One male tenant, who has dementia, would like to offer informal telephone befriending to someone, but can’t find anyone interested in the Gloucestershire scheme where he lives. His many interests include gardening – and chatting about his past, which includes time in the army, as a champion swimmer, and building road bikes. He has decided to put this on hold for now while some other health problems are sorted out. In the meantime, Tami has been talking to Joanne about whether this might appeal to someone living in one of the Herefordshire schemes as a first step in exploring connecting like-minded individuals in different areas.

In the West Midlands, Kevin Rudd’s interest in seeing what people can do was also particularly motivated by some gardening news. During the first lockdown, residents in one retirement scheme took it on themselves to make their communal garden as attractive as possible. In addition to the routine maintenance carried out by gardening contractors, they sowed, planted, tended the greenhouse, and ended up winning a Stonewater gardening competition.

Residents are already well into their gardening plans for 2021 – the photos here showing what they achieved during their first year of working together to make their communal garden as attractive as possible for everyone, in 2020. 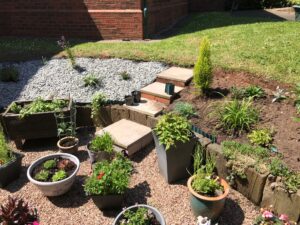 In February and March 2021, two new online workshops were run by Dance Syndrome for the Valuable and Vulnerable project, […]

RT @neilmcrowther: The experience and what came before it led me to write this about the ways we can much better support the wellbeing of p…

If you've not seen it yet, do take a look at our exciting new job vacancy?: communitycatalysts.co.uk/join-our-team/ You'll be supp… twitter.com/i/web/status/1…